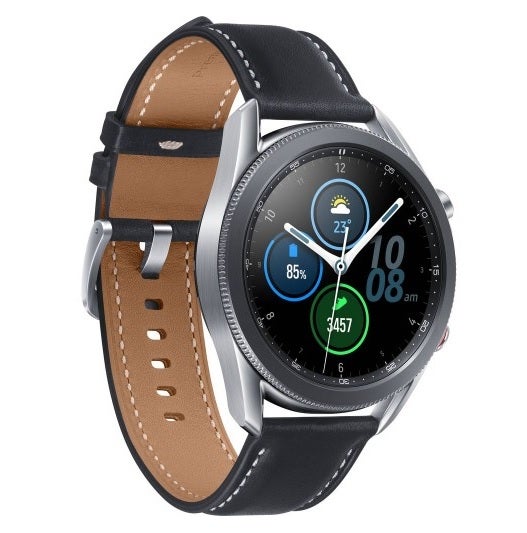 The smartwatch with some tricks up its sleeve.   Giving Apple a run for its money, the Samsung Galaxy Watch 3 is one of the best smartwatches on the market right now. Not only does it look…
Read more

The Samsung Galaxy Watch 3 offers one of the best smartwatch experiences on the market, with a dazzling design and top-end spec that allows it to run as smoothly as any other wearable on the market. It isn’t faultless, and its improvements over the original Galaxy Watch are limited, but if the middling battery life or high price don’t put you off this may be perfect for you.

The smartwatch with some tricks up its sleeve.

Giving Apple a run for its money, the Samsung Galaxy Watch 3 is one of the best smartwatches on the market right now. Not only does it look good on the wrist, it runs very smoothly as well. Complementing the slim, lightweight design is a very vivid, full-colour circular Super AMOLED display. There is an option to have the display always-on, but that does eat into battery life significantly. The display is easy to read in any type of light, even in bright sunshine.

There’s 8GB of internal storage available on the wearable, of which about 3.5GB is taken up by the pre-loaded apps. So while 4.5GB doesn’t feel like much, it’s plenty for a smartwatch, even if you’re loading it up with some music alongside other apps.

Samsung uses its own Tizen operating system in its wearables, and this makes for a pretty good user experience. Navigation is easy, especially since you can use the Watch 3’s rotating bezel to scroll through the apps. You can even tap and swipe to bring up apps if you wish.

And, like most other wearables, the main focus here is fitness. While it’s not as in-depth as Samsung’s Galaxy Watch Active series, there’s a lot of features here to keep you on track, including an auto-start feature that’s triggered off by seven different activities – a very handy feature to have. The Watch 3 can also recognise when you’ve stopped a workout, asking you if you’ve finished. In fact, it’s smart enough to even recognise you’ve stopped, say, running and started walking and transitions smoothly to that – something the Apple Watch is unable to do.

While the Samsung Galaxy Watch 3 does have the hardware for ECG monitoring, it’s not been approved for use in Australia yet. But there is on-demand VO2 Max readings to check the maximum amount of oxygen in your body during a workout. Alongside it is also a SpO2 monitor that works while you sleep, as well as blood pressure monitoring, although that hasn’t been rolled for use in Australia either. There’s also a women’s health section as well.

Practically everything about the Galaxy Watch 3 is great, but its battery life can be disappointing. It’s just a 340mAh cell – smaller than the one in the original Galaxy Watch – that gives you about a couple of days of use.

So, while it isn’t without its faults, the Samsung Galaxy Watch 3 is one of the best money can buy, if you’re able to foot the bill on its premium price tag.

Verdict: If you’re comfortable with its high price and middling battery life, the Samsung Galaxy Watch 3 is a great buy. Admittedly the Tizen app store is limited, but Samsung has provided plenty of alternatives to popular apps that will keep most users happy.