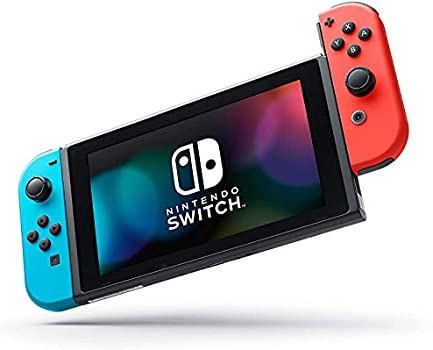 The Nintendo Switch is one-part handheld and one-part home console, and hopes to be the only device you'll ever need for gaming, wherever you are. The hybrid console is an undeniable success, offering up an exceptional level of handheld graphical quality, while seamlessly transitioning into a home console – though this very adaptability has required compromises on power and functionality compared to the dedicated consoles and handhelds that came before it.

While the Nintendo Switch can’t compete with the powerful spec sheets of Microsoft and Sony’s next-gen consoles, it doesn’t try to. Instead, this hybrid console offers something that others don’t. The Switch is a go-anywhere gaming device, and can be played in three modes: handheld, tabletop or console (TV mode).

Nintendo also has a wealth of gold in its gaming library, which has helped to bring in fans both old and new alike. Popular franchises bring the nostalgia, with various titles from The Legend of Zelda and the Super Mario series putting out high-quality games. There are great indie titles too, so almost anyone can get enjoyment out of the Switch.

The Nintendo Switch is a firm favourite, and its unique design and portability is a large part of its success. It manages to be both a home console and a game-on-the-go device all at once, and the transition between these modes happens seamlessly, and can even be done in the middle of play.

In its quest to create this take-anywhere device, Nintendo had to make a few compromises. The Switch’s screen is wonderfully bright with colours that pop, but the graphics aren’t up to scratch when compared to dedicated home consoles.

There’s some compromise in its design too – while it’s an excellent handheld device, the layout of the controller can feel a little cramped after an extended time of play. While some may find long periods of use uncomfortable, it’s not a dealbreaker.

When it first launched in 2017, the Switch’s battery lasted between 2.5 and 6 hours, with graphic-intensive games such as The Legend of Zelda: Breath of the Wild being a particular drain on the device. The updated version, which came out in 2019, has thankfully seen a boost in battery life, bringing it to a much more usable 4.5 to 9 hours.

When buying the Nintendo Switch today, you’ll want to make sure you’re getting the 2019 version. The best way to determine this? The latest Switch comes in an all red box, while the original from 2017 has a white background on its packaging. At the end of the day, most reputable retailers will be selling the most up-to-date version.

Verdict: The Nintendo Switch has proved to be an incredibly popular device. Nintendo found a winning formula when it released the hybrid device, and its combination of exclusive games and versatility far outweigh its minor setbacks.